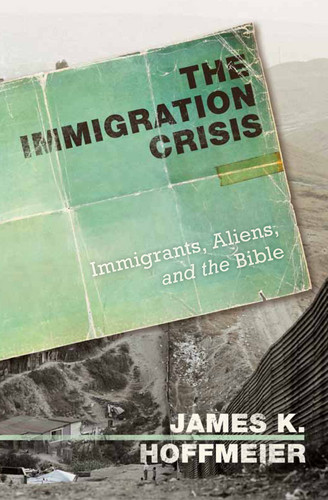 Growing up in a foreign land, being expected to abide by another culture’s customs, and eventually being forced to leave the place which had become home. These are all issues which Dr. James K. Hoffmeier faced while growing up in Egypt as the son of American missionaries. Political pressure would end up causing the revocation of his family’s visas and he again became an alien in Canada. This background and his experience as an Old Testament scholar give Hoffmeier a unique perspective on the contemporary immigration debate in North America and Europe. He explores these issues in his new book: “The Immigration Crisis: Immigrants, Aliens, and the Bible.”

From the opening chapter, Hoffmeier looks into why immigration is a relevant issue in the western world today. With that foundation, he goes on to focus the body of the book on surveying scriptures and the cultural contexts of the periods in which they were written. Hoffmeier starts in Genesis. In many of the key stories during the Patriarchal History, they involve figures such as Abraham, Isaac, and Joseph living as aliens in foreign lands.

What is noteworthy from this period is the fact that the Mosaic Law had not yet been given, yet these individuals were still socially compelled to adhere to certain customs and mores in the different cultures in which they lived.

In the following chapter, Hoffmeier carries his treatment into Exodus and the exploitation of the Israelites under Pharaoh. After the Israelites are delivered from Egypt, and they arrive at Mt. Sinai, God begins to reveal the Mosaic Law. From the initial imparting of the Law, God ordains for certain special protections pertaining to aliens living amongst the Israelites.

As Hoffmeier will note later in the book, part of the reason for this was that there were non-Israelites who had left Egypt and who had partaken in the exodus (cf. Exodus 12:38). Also in the Mosaic Law are frequent references to the fact that the Israelites themselves had once been aliens in Egypt.

Hoffmeier also surveys the references to aliens which can be found in the prophetic genre, and he offers a treatment of the Jewish people who were displaced from the Promised Land during the Exilic Period. Finally, Hoffmeier finishes the Biblical account of these issues by discussing the New Testament.

While he notes that the New Testament doesn’t specifically give commands pertaining to aliens and foreigners, there are significant stories involving key figures in foreign lands. Most notably, the family of Jesus fleeing into Egypt after His birth.

Also germane to the subject is the Pauline directive that believers need to follow secular laws. Given that millions of legal and illegal immigrants in America are from Central and South America – places which are overwhelmingly Catholic and Protestant – this naturally leads into Hoffmeier’s final analysis on western immigration. Among these conclusions, Hoffmeier believes that foreign born individuals who are legally recognized aliens within a society should have certain rights which are extended to the naturalized citizens of that society.

Examples include rights for children to receive a public education, health care, and the ability to receive benefits from various welfare programs (in cases where aliens are in need of such benefits). Conversely, foreigners who are not legally living in a society, Hoffmeier argues, should not receive those benefits considering that they do not have the right to be in the new land in which they are dwelling.

As Hoffmeier meticulously notes in his book, this is consistent with the approach taken throughout scripture.

In terms of positive reaction to this book, I appreciate Hoffmeier’s scholarship in bringing the pertinent scriptural passages related to immigration into an understandable context. In the present-day immigration debate, there are times when people attempt to use scripture to supplement their arguments (both for and against immigration.)

Without a critical look into the objective meanings of these texts, it can be easy to make exegetical errors. As an example from the book, terms like “alien” and “foreigner” come from different Hebrew words. They are not interchangeable because they refer to different categories of people who have different legal protections. In some English translations of the Bible, these terms can be translated as the same word which can lead to interpretive mistakes.

What’s more, in the modern discussion, advocates and opponents of immigration have tried to control the language of the debate. Terms like “illegal immigration” and “illegal alien” have entered into American parlance. Given the confusion which English translations of the Bible can instill, Hoffmeier’s differentiation between various classes of immigrants, and explaining the Biblical analogs to the contemporary terms is beneficial for Christians who wish to more fully understand this topic.

Misinformed Biblical quotations do nothing to further the dialogue. Hoffmeier’s exegesis helps to elucidate which passages are discussing legal aliens and which are discussing foreigners.

I feel that there are elements of this book which do warrant criticism, however. In the book’s opening chapter, Hoffmeier talks about how there are over ten million illegal foreigners in America (with some estimates going upwards of 20 million people). With this issue and in the context of stating the purposes of this book, Hoffmeier says later in the first chapter “This is not the place to debate the problems or the merits of immigration for America. The pressing issue is what to do with the millions of illegal aliens already here.” I thought that “what to do with the millions of illegal aliens already here” would lead to more substance in terms of proposed solutions. To be fair, I wasn’t expecting one book by one scholar to have “all of the answers” in terms of what society should do. But I feel that the actual issue of foreigners and what our society can realistically do are largely absent in this book.

To his credit, I feel that his ultimate conclusions on how society ought to extend certain rights and privileges to legal aliens which are not to be extended to illegal foreigners are stances which are reasonable, Biblical, and with which the average person can agree.

I also feel like those positions are already largely reflected in American public policy. That being the case, and returning to Hoffmeier’s goal of dealing with “what to do with the millions of illegal aliens already here,” offering positions which are already socially acceptable bring nothing new to the discussion of what our lawmakers can do to remedy these issues.

In conclusion, this is a book which is easily accessible and which can help to solidify opinions among Christians. While I didn’t feel that it offered much in terms of solutions for how to approach illegal immigration in America today, I still believe that it is worth having a doctrinal and contextual familiarity with how aliens and foreigners were treated and viewed during Biblical times because I think that this established worldview has implications in how the church can engage immigrants. For that reason, I feel that this is a book worth reading, especially for Hoffmeier’s discussion of aliens and foreigners in the Torah which is focused on in chapters 2-5.

The genetics challenge on Adam and Eve