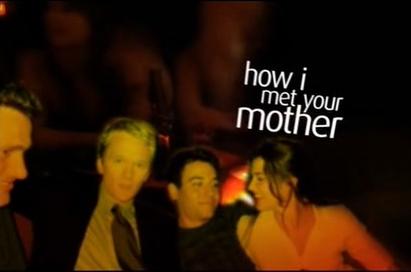 Spoiler alerts, if you’re not up to date on this show!

How I Met Your Mother is my favorite show of all time. Throughout this ninth (and final) season, the episodes revolve around Barney and Robin’s wedding weekend, while flashing forward to Ted being married to the Mother. Although we still haven’t seen the two meet.

In looking to th future, in only part of a season, I think they’ve done a good job developing the chemistry between Ted and the mother’s character. But we don’t know anything about how they build that relationship.

In tonight’s episode, there was a striking moment when a story Ted is telling to the Mother (in 2024) focuses on Robin being reunited at her wedding weekend. It’s the first time in the entire series that Robin’s mother has ever been shown. Ted’s wife comments “who would miss her own daughter’s wedding,” which prompts Ted to cry.

Why does he cry?

Is it because he’s so moved by Robin being reunited with her mom a decade before?

I think he cries because in 2024, Ted’s wife is terminally ill and he breaks down because he knows that she won’t be able to make it to THEIR daughter’s wedding.

I think it also establishes the entire premise for the show, that sometime after her death, Ted sits his teenage children down to tell them the story about how he met their late mother.

The basis for tonight’s episode is Ted and the Mother telling stories to each other from their past, and realizing they have no new stories to tell. But there’s a scene where the Mother tells Ted that he can’t live in his past stories. I think this is the advice of a character who’s dying, and telling him he’s going to need to continue living a full life after she’s gone.

This would also explain why the mother is never shown in scenes that flash forward. Because she’s not around in the future. Having seen every episode, I’m not aware of an instance where the future narrator refers to the mother in the present tense.

But I think that it gives closure to the entire series. For nine years, we’ve been on a journey with Ted Mosby, a hopeless romantic who believes in soul mates and love stories. And we know that he finds her. He finds the love of his life. He succeeds in his quest. But the love is tragically cut too short, and he has only a few years with her. But he still had her. He still got to experience that love.

In looking to their married life, we’ve been able to experience a piece of their life together. If the character survives, then we’ve only had a small glimpse of what that life was like, and the show basically concludes with “and they lived happily ever after.”

I think the mother’s character dying is much richer, and while it’s sad, it’s beautiful in a way.

And before I seem morbid, let’s remember that it’s a fictitious show! Also, while Ted is an idealist and a dreamer, the reality of the show has never been of a “happily ever after” sentiment. It’s not that Ted leaves empty handed. He gets the perfect woman for him, the one who met all of his ridiculous criteria, and got to have two kids (a boy and a girl). But regardless of if a marriage lasts 10 years, or 80 years, it’s always too short when it’s true love.

After having this revelation tonight, I looked online and realized that others have made this prediction as well. Others have cited this quote from Ted in the episode “The Time Travelers” which originally aired last season.

At the time, it was a very cryptic soliloquy from Ted.

Hi— I’m Ted Mosby. In exactly 45 days from now you and I are going to meet and we’re going to fall in love and we’re going to get married and we’re going to have 2 kids and we’re going to love them and each other so much. All that is 45 days away, but I’m here now I guess because… I want those extra 45 days with you. I want each one of them. Look and if I can’t have them I’ll take the 45 seconds before your boyfriend shows up and punches me in the face, because… I love you. I’m always gonna love you, til the end of my days and beyond. You’ll see.

Why is he so focused on getting more time with her? Is it because he just loves her so much that he wants more time? Or is it because he’s looking back, knowing that she’s now (in 2030) gone, and wishes he could have met her sooner?

In the context of that episode, future Ted is telling the kids that he went to an event (Robots vs. Wrestlers) with Barney that night, but looking back years later, he wishes he instead could have gone to the Mother’s apartment and made that speech.