Audio: Josh Benner is the pastor of Christian Bible Church in Cissna Park, Illinois. He has a Master of Divinity from Trinity Evangelical Divinity School. He enjoys writing about faith and culture. He has an awesome […] 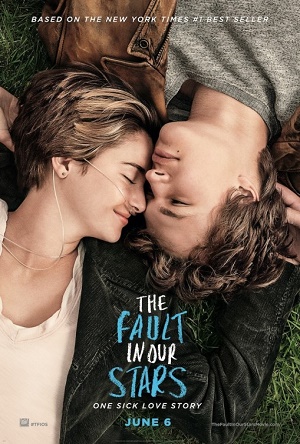 When I first heard that the book “The Fault in our Stars” was about a girl with cancer, I thought that it was going to be a piece of schmaltzy garbage. When I picked up the book in February, I was immediately drawn in, reading it in two long sittings over the span of about 11 hours. Since that day, I had been eagerly awaiting the movie that was released last night.

I won’t say anything that would potentially spoil the movie until the last paragraph. The theater was one of the fullest I’ve been to in a long time. I felt that this movie was as true to the book as any film adaptation I have ever seen. Shailene Woodley, who plays the book’s protagonist, Hazel Grace Lancaster, had the feel and spunk that you would expect from Hazel. Ansel Elgort plays Augustus Waters and even looks like how I pictured Gus, and was another perfect embodiment of the fictional character. In the book, a love story develops between Hazel and Augustus as they meet at a support group for teens with cancer. Woodley and Elgort had great chemistry on-screen, and the development of their relationship felt natural.

END_OF_DOCUMENT_TOKEN_TO_BE_REPLACED

In the movie JFK, there’s a climactic scene where Kevin Costner shows the absurdity of the idea that Lee Harvey Oswald could have been the lone gunmen who assassinated John F. Kennedy. To just watch that scene, it might seem like a compelling argument. Conspiracy theories about John F. Kennedy have always been prevalent. It’s been suggested that it was the Soviets or that Castro wanted him dead to avenge the Bay of Pigs. Others have said the mafia wanted him dead because of Attorney General Robert F. Kennedy’s iron fisted stances on dealing with organized crime. I’ve read that Kennedy knew his health problems would continue to degenerate and he personally staged the assassination as an elaborate suicide to cement his legacy. Others suggest that Lyndon Johnson wanted him dead, that the two men hated each other, and that Johnson would have happily seen Kennedy killed in order to become the president.

It’s important to understand that there has never been any proof to show that the Soviets, Castro, Johnson, or the mob had anything to do with the Kennedy assassination.

At the end of the day, Occam’s Razor needs to prevail. The simplest conclusion is the most reasonable. The conclusion which is making the least assumptions needs to be favored. Such extreme events would have needed to have occurred to have pulled off the various conspiracies and to have successfully kept them secret for a half century. The burden of proof must be on the most plausible explanation which is that Lee Harvey Oswald acted alone. In interviews, members of Oswald’s own family have said that they don’t raze issues with the belief that Oswald acted alone, because it’s what they believe too!

END_OF_DOCUMENT_TOKEN_TO_BE_REPLACED

Late October. 1962.
America is in a panic as the U.S. and the Soviet Union appear to be close to the brink of nuclear war. The early morning hours of October 28 would prove to be the final hours leading up to the peaceful conclusion of the Cuban Missile Crisis. But in the days and hours which led to that safe conclusion, there was tension. In our nation’s capital, some were readying fallout shelters, while others wanted to get as far away from Washington as possible in the actual event of war.
But for a young woman named Mimi, she lay “sleeping like a baby, wrapped in soft linens, in a bedroom on the second floor of the White House.”
END_OF_DOCUMENT_TOKEN_TO_BE_REPLACED