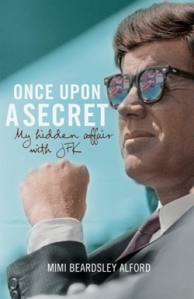 Last week I gave high praise to the new book Once Upon a Secret: my affair with President John F. Kenedy and its aftermath by Mimi Alford. I believe that it’s a well written and enjoyable book. That being said, I do think that it is at least fair to mention that some of Alford’s claims need to potentially be taken with a certain degree of scepticism.

In her discussion of working in the Kennedy White House, many of the people she claims had knowledge of her affair with the president are now deceased. Furthermore, given the nature of her relationship with Kennedy, it was hidden from outsiders, which makes her claims difficult to verify. To believe what is said in the book, we essentially have to take Alford’s word for it.

In the fall of 1962, America and the USSR appeared to be on the brink of nuclear war in the Cuban Missile Crisis. Alford was away in college at the time, but was still occasionally traveling back to Washington to be with the president. After making the trip, when Kennedy finally got a break from his intensive meetings, Alford writes:

The President joined us after a while, but his mind was clearly elsewhere. His expression was grave. Normally, he would have put his presidential duties behind him, had a drink, and done his best to light up the room and put everyone at east. But not on this night. Even his quips had a halfhearted, funeral tone. At one point, after leaving the room to take another urgent phone call, he came back shaking his head and said to me, “I’d rather my children be red than dead.” It wasn’t a political statement or an attempt at levity. These were the words of a father who adored his children and couldn’t bear them being hurt.

Later that evening, the president was again busy in meetings. Alford got tired of waiting and had gone to sleep

The nation’s capital was in terror. I don’t remember it that way. Here’s how I remember it: As President Kennedy met with the men he had chosen to handle the crisis…I was sleeping like a baby, wrapped in soft linens, in a bedroom on the second floor of the White House. At the moment, it felt like the safest place I could be.

During the summer of 1963, Jackie Kennedy gave birth to a son named Patrick. Patrick was born premature and had some significant health issues, tragically surviving only a day and a half. From Alford’s perspective of that experience, she writes:

I had never seen real grief in my relatively short life until I saw the President when he returned to the White House while Mrs. Kennedy recovered for a few more days in the hospital. He invited me upstairs, and we sat outside on the balcony in the soft summer evening air. There was a stack of condolence letters on the floor next to his chairs, and he picked each one up and read it aloud to me. Some were from friends, others from strangers, but they were all heartfelt and deeply moving. Occasionally, tears rolling down his cheeks, he would write something on one of the letters, probaby notes for a reply. But mostly he just read them and cried. I did too.

Then there was the last time Alford saw President Kennedy. It was in November of 1963, the week before his fateful trip to Dallas:

He took me in his arms for a long embrace and said, “I wish you were coming with me to Texas.” And then he added, “I’ll call you when I get back.”

I was overcome with a sudden sadness. “Remember, Mr. President, I’m getting married,” I said.

The Cuban Missile Crisis was the most significant political event to happen during Kennedy’s presidency.

The death of Patrick Kennedy was the most personally significant event to happen during Kennedy’s presidency.

The assassination of Kennedy was the most culturally significant event of a generation. And with all of those events, Alford had unique, firsthand, and never before documented perspective.

I read a review which was critical of the book and called Alford the most boring Kennedy mistress to come forward. If everything she says in the book is true, I wholeheartedly disagree with that sentiment.

During the Holocaust, there was a teenage Jewish boy at one of the Nazi camps. One day, a girl came and saw the boy at the fence. She herself was Jewish but the identity’s of her family had been hidden and they were being passed off for Christians.

She felt pity for the boy and threw him some food. This was something that she would do regularly over the next several months, until the boy was eventually moved to a different camp. He eventually would survive the horrors of the holocaust and eventually move to America.

A few years later, some friends of his set him up on a blind date with a young woman with whom they thought he would get along. As the two talked and found out about each other, they realized that this young woman had been the girl who used to throw the Holocaust survivor food. He proposed to her on the spot. The two got married and lived happily ever after…

What an amazing story. On two different occasions, Ophrah interviewed the couple and tearfully called it the greatest love story she had ever covered on her show.

Shortly before the man’s memoir, which chronicled their story was released, it was found out that the story was made up. The man really had been in a concentration camp, and his wife really had been concealed in order to be kept from gong to a camp, but she never gave him food and the two never met before moving to America.

So there were grains of truth to the story, but the details that made the story worth reading weren’t true.

Likewise, with Alford’s book, there are undoubtedly elements of truth. I’m certainly not second guessing the fact that she really had worked in the White House. That’s easily verified. And long before Alford ever wrote this autobiography, other people had implied that she had had an affair with Kennedy. That part is probably true too (especially considering Kennedy seems to have had an affair with every woman he ever met). But with all of the affairs that he had, it seems a bit ironic that he coincidentally happened to be with the same mistress during all of the major events of his life and presidency.*

To make the story more compelling, I don’t think it’s beyond the realm of possibility that Alford would take creative license in the recollection of some of her interactions with Kennedy. There are obvious motivations ($$$) to do so.

*note, one event that is not mentioned is the Bay of Pigs Invasion which was a botched military coup meant to remove Fidel Castro from power. Alford started working in the White House during the summer of 1962 which was more than a year after the Bay of Pigs which is why she provides no first hand knowledge on the president’s reaction.