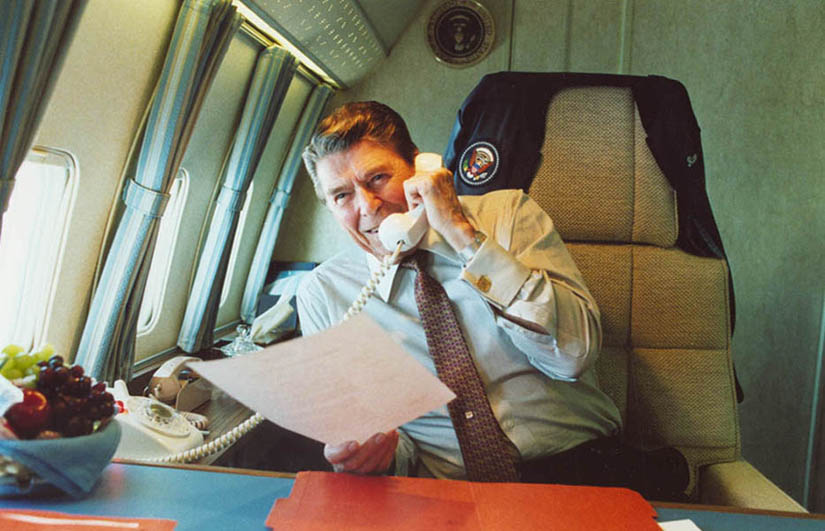 Ronald Reagan died 10 years ago today. While I’m too young to remember his presidency, over the years, I’ve learned a lot about Reagan, and I believe that he is the greatest president in modern American history. Did he make mistakes? Of course.

But I look to Reagan and I so many great qualities that our current president lacks. Reagan built up the military, Obama tears it down. Reagan was a leader. Obama is an appeaser. Reagan believed that it was “morning in America.” Obama wants to “fundamentally transform America.” I find myself asking how President Obama would have handled diplomatic situations with the Soviet Union. For Reagan, he knew that America had the moral high ground between the tyrannical regimes that communism led to. He wasn’t a cultural relativist, he viewed it as the great evil that it was. As Reagan said in his great “A Time for Choosing” speech, ” We’re at war with the most dangerous enemy that has ever faced mankind in his long climb from the swamp to the stars, and it’s been said if we lose that war, and in so doing lose this way of freedom of ours, history will record with the greatest astonishment that those who had the most to lose did the least to prevent its happening. Well I think it’s time we ask ourselves if we still know the freedoms that were intended for us by the Founding Fathers.”

I look at Obama and I see him doing absolutely nothing to promote freedom of liberty. What has he done to advance freedom? What areas are freer today than in the past?

As Reagan once said in that same speech, “Now it doesn’t require expropriation or confiscation of private property or business to impose socialism on a people. What does it mean whether you hold the deed to the—or the title to your business or property if the government holds the power of life and death over that business or property? And such machinery already exists. The government can find some charge to bring against any concern it chooses to prosecute. Every businessman has his own tale of harassment. Somewhere a perversion has taken place. Our natural, unalienable rights are now considered to be a dispensation of government, and freedom has never been so fragile, so close to slipping from our grasp as it is at this moment.”

I ask again, where are we freer because of Obama? I can only think of areas where there’s more government expansion. Where states rights are diminished. Where the government takes over industries like health care. The interference and regulations on us having access to our own natural resources.

Reagan never declared a war. He only had troops involved in situations on three occasions during his eight years as president. But he still valued building up the military and had a philosophy of peace through strength. A belief that when the freest nation was the strongest nation, it kept tyranny in check. Today, as China is continuing to strengthen their military and as Russia is building there’s back up and seizing territories in Europe, we are scaling our own military back.

“Freedom is never more than one generation away from extinction. We didn’t pass it to our children in the bloodstream. It must be fought for, protected, and handed on for them to do the same, or one day we will spend our sunset years telling our children and our children’s children what it was once like in the United States where men were free.” -Ronald Reagan

And while some might look at spending that was too high or the Iran Contra situation, I would much rather have a Ronald Wilson Reagan than a Barack Hussein Obama leading our country today.