Today is the 75th anniversary of the Normandy invasion. Over 150,000 Allied forces took part in the invasion. Over a million men were part of the overall battle of Normandy. Thousands of ships and planes. Even trying to fathom the size of the operation is impossible to comprehend.

A lot of our mental images of what D-Day would have been like come from the opening sequence of the movie Saving Private Ryan. D-Day hero and Medal of Honor recipient Walter Ehlers used to tell people to multiply that scene by 60 to appreciate what it was actually like.
It’s truly unimaginable to think of what the first waves of American troops at Omaha beach faced. Overwhelming fire from the front, the left, and the right. As troops rode in on Higgins Boats, some of them were shot as soon as the doors dropped, killed or wounded before they ever made it to land.

The older I get, I think the more I begin to appreciate what these men (and everyone who has fought to defend our freedom) went through. Not that I understand their experience, but to have an appreciation for how young these men were. To have a greater appreciation that everyone who dies in war is someone’s son, husband, brother, best friend. Most of the men who gave their lives on D-Day were younger than I am now. I’ve had the opportunity to live a longer life than they did when they were the ones who made the ultimate sacrifice for freedom.

I think of where I was in my late teens and early twenties. I think of where the generation of college kids is today. I see safe spaces in schools. I see people complain about “micro aggressions,” I see how easily offended our society is. These men had to go to war against Nazi Germany.

It strikes me that these events happened 75 years ago. Within the lifetime of my grandparents. In one sense, not so long ago, but in another sense, a totally different era. For those who participated in the invasion who are still alive, the youngest of them are in their 90s. I think of all the many decades of life that these men have had since that day. The vast majority of their lives have come in the aftermath of D-Day and World War II.
This week, I’ve gone out of my way to listen to the stories of those who survived that day. Incredible stories. With the War on Terrorism, PTSD is a common subject that gets talked about. It wasn’t a focus then the way it is now.
It’s interesting listening to these old men describing their experiences from a lifetime ago. The horrors that they saw. Some of them get emotional talking about it. But I think of how they’ve had to hold onto those horrible memories for a lifetime. I think about those things and it makes me appreciate the sacrifices even more. Because those who fight for our freedom don’t just fight a battle or a few battles, but they then have a lifetime of having to carry the burdens of their experiences.

I think of the generation who fought in World War II. We call them The Greatest Generation. And they are. They had to survive the Great Depression and fight the most horrendous war the world has ever seen. And the greatness of the World War II generation isn’t just in those who fought overseas. It was a nationwide effort.
The war effort affected virtually every facet of American life. Companies shifted their manufacturing efforts to supporting the war and supplying the military. Maytag went from making washing machines to making parts for airplanes. Firestone Tires made artillery shells and aluminum containers for food transport.
Products like sugar, butter, bacon, and cheese were rationed. As were penicillin and other medicines, along with rubber and certain types of metals. Materials for clothing such as silk and nylon were needed for uniforms. Everything went to supporting a cause that was so much bigger than any one person.
And everyone’s contributions mattered.
It wasn’t the life this generation chose for themselves. It’s the circumstances that history forced them into. And they served and did their duty. 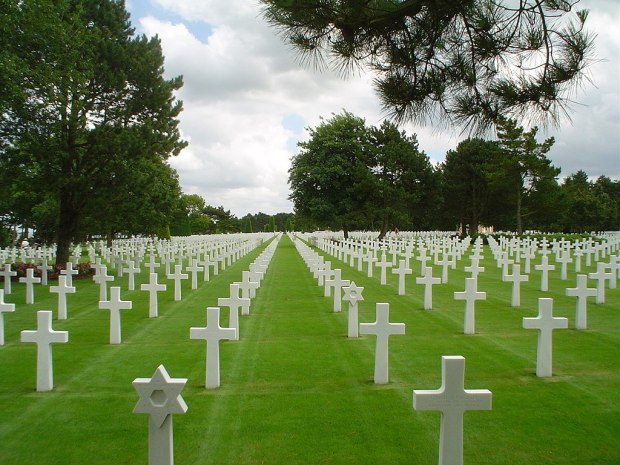 In America, President Roosevelt led the nation in prayer after the D-Day attack. I think of how hard people fight for separation of church and state. The president welcomed the entire nation to join him in prayer and then led that prayer.

“My fellow Americans: Last night, when I spoke with you about the fall of Rome, I knew at that moment that troops of the United States and our allies were crossing the Channel in another and greater operation. It has come to pass with success thus far.

And so, in this poignant hour, I ask you to join with me in prayer:

Almighty God: Our sons, pride of our Nation, this day have set upon a mighty endeavor, a struggle to preserve our Republic, our religion, and our civilization, and to set free a suffering humanity.

Lead them straight and true; give strength to their arms, stoutness to their hearts, steadfastness in their faith.

They will need Thy blessings. Their road will be long and hard. For the enemy is strong. He may hurl back our forces. Success may not come with rushing speed, but we shall return again and again; and we know that by Thy grace, and by the righteousness of our cause, our sons will triumph.

They will be sore tried, by night and by day, without rest-until the victory is won. The darkness will be rent by noise and flame. Men’s souls will be shaken with the violences of war.

Some will never return. Embrace these, Father, and receive them, Thy heroic servants, into Thy kingdom.

And for us at home — fathers, mothers, children, wives, sisters, and brothers of brave men overseas — whose thoughts and prayers are ever with them–help us, Almighty God, to rededicate ourselves in renewed faith in Thee in this hour of great sacrifice.

Many people have urged that I call the Nation into a single day of special prayer. But because the road is long and the desire is great, I ask that our people devote themselves in a continuance of prayer. As we rise to each new day, and again when each day is spent, let words of prayer be on our lips, invoking Thy help to our efforts.

Give us strength, too — strength in our daily tasks, to redouble the contributions we make in the physical and the material support of our armed forces.

And let our hearts be stout, to wait out the long travail, to bear sorrows that may come, to impart our courage unto our sons wheresoever they may be.

With Thy blessing, we shall prevail over the unholy forces of our enemy. Help us to conquer the apostles of greed and racial arrogancies. Lead us to the saving of our country, and with our sister Nations into a world unity that will spell a sure peace a peace invulnerable to the schemings of unworthy men. And a peace that will let all of men live in freedom, reaping the just rewards of their honest toil.

Thy will be done, Almighty God.

Freedom isn’t free. Thank those who fought on that horrible day for our freedom.