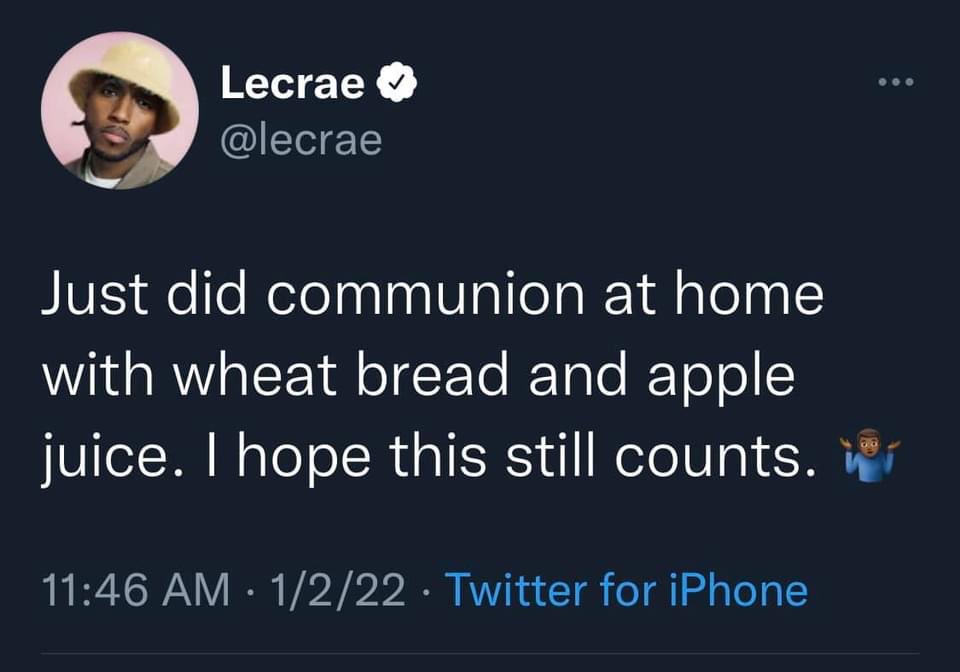 I saw quite a few responses on Twitter this evening when the rapper Lecrae mentioned taking communion at home with wheat bread and apple juice and saying “I hope this still counts.”

Communion is a sacred remembrance of the gospel which was instituted by Christ himself with the commandment “do this in remembrance of me” (Luke 22:19).

There are lots of different views of communion within Christendom. Even though I pastor an independent Bible church, my view of communion aligns pretty well with Presbyterianism where I believe that communion is to be administered to a congregation by the pastor, overseen by elders, and served by deacons. It stands to reason that those people would oversee and serve communion since they’re charged with overseeing and serving the church. Last year, when churches were shut down during Covid, I saw some people partaking of communion at home. While everyone won’t agree with me, that’s not communion. Communion is mean to be COMMUNal. Virtual communion is not communion.

But they all would agree that just taking it upon yourself to have wheat bread and apple juice and to call that communion is not communion. There ought to be fidelity to Jesus and how he instituted communion, not just doing whatever you feel like.

Thinking you can just make communion whatever you want it to be comes from a shallow theology. Any church with history would consider ad hoc communion to be sacrilegious. It comes form the modern age that makes Christianity existential, where everyone does what is right in their own eyes, and where we do whatever we want and justify it as long as it’s sincere or “from the heart.”

Jeremiah 17:9 says: the heart is deceitful above all things, and desperately sick; who can understand it?

There are some things where there are prescribed ways to do them and communion is one of those things.

My point isn’t just to criticize Lecrae. Too often we try to take the sacred and just make it whatever we want it to be.

Communion is communal. Communion is given by Christ as a sign of the new covenant. As a covenantal sign, and as such, it is meant for the church during worship. It can’t just be you taking something you’re eating and calling it communion. Even if you’re with your family, that doesn’t make it communion. There’s a Congregational aspect to it. There’s a sacred and set apart aspect to it.

What about home churches? I can appreciate home churches. I would also hope that home churches would still handle communion in an appropriate Biblical manner and not just arbitrarily create elements.

You can have a fellowship meal. You can thank God while you’re eating a meal. But that doesn’t make those things communion anymore than dunking yourself in a swimming pool or bath tub doesn’t mean you just baptized yourself.